Melissa Fernandez attended Redlands High School where she led them to the CIF Title in 2000, as well as earning CIF MVP Honors. After she graduated, she attended UC Irvine where she received her MBA in 2012, during her time as an Anteater she captained the first ever women’s water polo team while being a 4 time Academic All-American. She has continued her playing career at the Masters level where she has received 8 Master’s All-Americans, in addition to being named Masters Athlete of the Year in 2013.

She has enjoyed a successful coaching career at the same time, leading Oceanview High School to eight league titles and 3 CIF Finals. 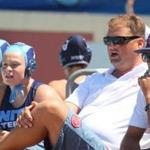 Jason is originally from Portland OR, he grew up playing and led his team as far as a 2nd place finish at Junior Nationals in 1989. After highschool he went on to play for two years at Golden West College where they earned two championship titles. Jason was formerly an Olympic Development Coach with USA Water Polo and was on staff at the zone level. Jason has been involved with age group water polo developing girls to compete at the U 14, high school & Olympic Development levels. He has a daughter who is currently competing at the HS level and another that will be competing in a few years.

Eric brings a wealth of experience and knowledge to the Pacific Coast Riptide staff. He is a current Olympic Development Program coach where he was runner up in 2017 for the National Championship. His coaching career has spanned over 9 years and has included 3 CIF Finals, Sunset League Coach of the Year, and multiple other top 10 finishes.

Sean was born in Placentia, CA where he swam competitively from the age of 4 until 11 at which point his family moved to San Diego and he began his career of water polo. He began coaching consistently beginning March 2013 for Huntington Beach Water Polo Club, he enjoyed success at all levels including multiple top 10 finishes at Junior Olympics. He has also worked as the Assistant Head Coach for Golden West College Womens Water Polo, the varsity assistant for Huntington Beach High School Girls Water Polo. He now head’s the Men’s Program at Edison High School.

During his playing career Sean earned the following accolades:

Sean has also enjoyed success in the coaching arena, leading his club programs to 3 Straight Top 10 Finishes, as well as leading Edison High School to the playoffs in each of his years at the program.

Stephanie is a Los Al High School alum, as well as a recent Cal Berkeley graduate (2017). She is currently training with the United States Women’s National Team and helped lead the USA World Games team to a Gold medal at the 2017 Championships.

Stephanie is excited to bring her knowledge and love for the game to the next generation of athletes.

Alexandra joins Pacific Coast Riptide with a strong history of high performance water polo. Born and raised in Regina, Canada she played for Team Saskatchewan for 10 years. She won several medals with Team Saskatchewan including a silver medal at 22 and Under National Club Championships in 2013 and an MVP award at Alberta Open in 2013. Internationally, she won a silver medal at the Youth Pan American Championships. In 2015, Alexandra was recruited by California State University, Long Beach. She is now starting center-forward for this team. She ended her junior year as the third leading scorer, with a record of 38 goals. Additionally, she received an Honorable Mention in the All-Conference First Team in 2016 and All Conference 2nd Team in 2017 season. She enters her senior year as co-captain of her team. While her career has primarily been as a high performance athlete, she also has maintained a strong interest in coaching. She developed coaching skills during her time in Saskatchewan, coaching various age groups with both boys and girls over several years. Ranging from 6-16 year olds and variety of levels. She has also taken team Sask for camps in California and partook in the John Hale tournament. She is now is excited to apply this experience coaching at, Pacific Coast Riptide.

Eike brings a ton of knowledge and experience to the staff. Having played at USC as well as professionally, she understands what it takes to compete at the highest levels. In 2014, Daube picked up her first career awards at USC, earning All-America Honorable Mention as well as All-MPSF Honorable Mention in her junior season… Also named MPSF Player of the Week. She won the NCAA National Championship in her time at USC.

After graduating she went overseas to play professionally in both Australia and Germany.